Have you ever found that when you are under the most pressure things unravel and make life even more difficult?

That’s how it has been for our son, Chris Jnr these past few weeks. 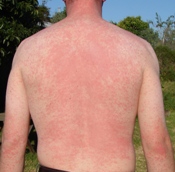 He has spent several months working on a short production to enter into the Tropfest FilmFestival in Sydney. There were various delays and hiccups, to complicate the wonderful help he had from a dedicated crew and cast.

However the deadline kept looming and the background track wasn’t ready yet. It was able to work out, but getting everything done in time was becoming a tighter and tighter fit.

Then Chris took ill – lethargic and off-colour. He rested as much as he could and had to wait on others anyway. Days whittled away and he did not recover, despite the various things his mum made him consume. Raw garlic is not one of Christopher’s favourite things.

Finally he was under financial pressure. He had spent too many days off work, doing the filming and then being unwell. So he pulled himself together and spent a day at work.

That night he came out in the most awesome body covering rash. (Is he allergic to work?)
Off to the doc who said he had only seen that kind of rash when someone takes antibiotics while they have what he diagnosed Christopher to have – Glandular Fever!

Despite his financial strictures, wildly decorated body and general lethargy – he headed off last night to finish the background track.
He arrived home at 2.30am with the thing almost complete.
He collected the finished DVDs today and has just come back from posting it – Express Post, so it will be in on time! Wow!!

Susan found that Glandular Fever can be more frequent in high achievers, or stressHeads.

Dealing with the Unexpected

So, how can you deal with the unexpected?
Is there a key to getting through when everything goes wrong?

Here are some simple steps to keep in mind.

“Give thanks in Everything!” That’s a Biblical command, so it’s a pretty good place to start.

“Cast your cares on God.” Now, that’s another Biblical command. You are to find your confidence in God’s care for you.

“Ask God for wisdom.” Sometimes we get tripped up because we aren’t flexible enough to navigate through challenges, but we simply crash up against them. Wisdom enables you to see what is ‘really’ important, instead of just bulldozing into the problem all day long.

No More Steps – Use These!

Now, I’m stopping at three. It’s popular today to create the 23 steps to having two dozen.
People love the little “self-help” suggestions and the pithy-sounding advice.

What I have given you are three Bible truths.
Before you go looking for something to add to the list, why not actually practice those three things? Hmmmm.

What about stopping right now and thanking God for Everything that is not going to plan. Take some time to list them off and to be thankful that God loves you and is helping you, despite the many things that are going wrong or just haven’t worked out yet.

Then take each of those problems and hand them over to God. Picture yourself placing them at God’s feet, giving up your ownership of each one, so they become God’s property, not yours. Since they are God’s problems now, it is up to Him to fix them, not you. You can now rest in the confidence that He can be trusted and He’ll do better than you anyway.

Now, while you’re at it, ask God for wisdom. Take each challenging situation and ask God to impart to you the specific wisdom that He has about each one of them. Some things may need to be abandoned as they are simply not on God’s agenda. Maybe you aren’t supposed to do them at all. Other things may need to be passed to others, or handled in a completely new way. That’s the wisdom you are looking for.

Once you’ve practiced that process a few times you’ll be much better equipped to deal with the unexpected.