Jessie Penn-Lewis was born in 1861, in Wales to a Calvinist Methodist minister. Her family had moved into an old museum – and in the attic of the old tower Jessie “taught herself to read the Bible freely” by the age of four. “There were books, books, and more books everywhere” in the home.

She received little schooling due to ill health, and was married at the age of 19 to a young British civil servant, William Penn-Lewis (despite her brother warning the fiancé that he would be looking after an invalid for life). She was converted on New Year’s Day, 1882, and ministered in the Young Women’s Christian Association, which – in 1886 – took a vital Christian stand.

She is spoken of as having received the Baptism in the Holy Spirit, testifying that the Cross must come first, in dying to self, to enable the believer to move on to Pentecost.

Her preaching ministry then took her around England and on to Scandinavia, Russia, Switzerland, Canada, the USA, and India. She spoke at conferences such as Mildmay and Keswick. She records the outpouring of the Holy Spirit at the Australian Keswick Convention of 1891, speaking of people who were “drunk with the joy of the Lord”.

She was also involved in the Welsh Revival of 1904-5, developing a close relationship with Evan Roberts, the principal evangelist of that revival. When Roberts suffered a mental breakdown in 1905 she and her husband welcomed him into their home where he lived for many years. He also co-authored several works with her.

She credits South African writer Andrew Murray as having had a profound impact on her, through his writings.

In her preaching and writing there developed a strong holiness theme … which placed emphasis upon the complete crucifixion of the ‘flesh’. Nevertheless, she was also invited to speak at the Keswick Convention in 1927 … where the doctrine of holiness is based more on the new nature ‘counteracting’ the old nature, rather than the ‘crucifixion’ view that she held in common with those of the Wesleyan tradition.

She established the Llandrindod Wells Convention in Wales and later the Matlock Conferences. She contributed regularly to “The Overcomer”, a quarterly with worldwide circulation, which she founded in 1908.

Her book, War on the Saints, became a best seller in Christian circles. She also wrote Spiritual Warfare and over a dozen other books, and at one time at least, she believed that the Great Tribulation began in 1906.

Not everyone thinks highly of Jessie Penn-Lewis. Some say that she developed an obsessive distrust of spiritual manifestations, such as were evident in the Welsh Revival and in the Sunderland Pentecostalism.

History accounts many instances when God’s Holy Spirit fell on people and changed their world forever. From the Day of Pentecost and Cornelius’ house in New Testament times to the Cane Ridge Revival, the home of Jonathan Edwards, the life of Wesley, the ministry of Sister Etter, the Welsh Revival, Azusa Street, George Mueller’s orphanage, and a multitude of other times and places, the Holy Spirit has fallen with amazing impact. 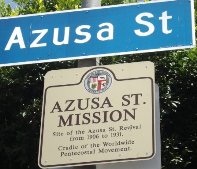 Since the days of the Pentecostal outpourings, over this past century, through the Charismatic Renewal Movement of the 1960’s and 70’s and the more recent visitations, people in churches, homes and meeting rooms have experienced times of awesome visitation by the Living God.

The poem I have just penned is my limited attempt to encapsulate those experiences and touch a chord with those who resonate with this wonderful grace. If this is not your experience then I encourage you to press in for the chance to be part of such a time and place as the manifested presence of God.

They stumbled and they fell, undone like drunken men!
Laughing to their knees to weep gratitude again.
Lost in adoration and found before His throne
These worshippers of Most High God found heaven as their own.

Enthralled by deepest senses of things too grand to share
They swooned and laughed and chortled, hands stretched to the air.
Singing inspiration in word and tongue and cry,
Heaven’s sweetness drugged them as happy hours slipped by.

The tempest passed, and crumpled lives hung on the ebbing breeze.
No mortal joy compared with that which brought them to their knees.
Stillness held command where silent tears did spill
And foreign words from trembling lips tumbled headlong still.

Exhausted and enthralled each held their heaving chest;
They had met with Daddy God and tasted of His best.
Transfixed in transformation they dared not stir this place
For each felt wonder undescribed now showing on their face.

And in the coming days, they’ll thrill to still recall
The sweeping of the Spirit and how it hit them all.
They’ll shed a tear of gratitude and feel a bond with men
Who joined them at God’s footstool there, and long to go again.

Thank You, Lord for the privilege of being there.

This is the day that …Evan Roberts was born in Wales in 1878.

Twenty-six years later God used this young Calvinistic-Methodist to ignite a revival fire across that land. With his “scorched Bible” (it had been damaged in a mine explosion), Evan Roberts prayed and preached. Sometimes he wept in the pulpit. Other times he simply talked in between songs and testimonies.

Converted in his teenage years, Roberts was faithful to Christian principles, church attendance, prayer and Bible study. He was known as an exemplary Christian young man. Leaving school at age 11, to work with his father in coal mines, he spent 12 years underground. Then for more than a year he was apprenticed to a blacksmith.

In the Spring of 1904 Evan experienced an increased sense of God’s presence. One night he woke from his sleep and was led into a deep communion with his Lord for hours. Every evening for the following months this experience was repeated.

Here is how Roberts described his experience to W.T. Stead in 1905: “For a long, long time I was much troubled in my soul and my heart by thinking over the failure of Christianity. Oh! it seemed such a failure—such a failure—and I prayed and prayed, but nothing seemed to give me any relief. But one night, after I had been in great distress praying about this, I went to sleep, and at one o’clock in the morning suddenly I was waked up out of my sleep, and I found myself with unspeakable joy and awe in the very presence of the Almighty God. And for the space of four hours I was privileged to speak face to face with Him as a man speaks face to face with a friend. At five o’clock it seemed to me as if I again returned to earth.”

Feeling a calling to win people for Christ, his only available option for training was for the Presbyterian ministry. He attended a Grammar school to prepare for theological studies. A few weeks after arriving at the school he attended a Convention at nearby Blaenanerch and there he experienced what he called his “Baptism in the Spirit”, as he responded to the prayer “Bend me oh Lord”.

This experienced radicalised his life and turned him into the Welsh Revivalist. His initial message was simply: Confess all known sin; Deal with and get rid of anything ‘doubtful’ in your life; Be ready to obey the Holy Spirit instantly; and Confess Christ publicly.

As he took that message to the valleys of South Wales, the 1904 Welsh Revival saw “100,000 outsiders converted and added to the Churches” within a year, writes Colin Whittaker (Great Revivals, page 95).

And then, some two years later, Evan Roberts faced health challenges and went to stay with Mrs Jessie Penn-Lewis, a wealthy English lady, and her husband. Together they published a magazine, The Overcomer (God’s Generals, by R. Liardon, page 99) and he co-authored with her the book, War on the Saints. This book drew from his revival experiences and taught saints how to do spiritual warfare. Watchman Nee credited Roberts with recovering the truth of Spiritual Warfare to the church.

Evan Roberts eventually left the Penn-Lewis home, lived alone in Sussex, and wrote booklets. He devoted himself to prayer for the kingdom of God to be established. He saw that his health challenges led him to a private ministry of reclusive prayer.

Later he moved back to Wales, and died there, in January, 1951, at the age of 72. The impact of his private years of prayer ministry may not be known until we reach heaven.

He was converted at the age of 14, under a Welsh revival preacher, Seth Joshua, who also influenced the young Evan Roberts. When a missionary lady asked him if he would be a missionary when he grew up he was troubled by the question of total surrender to God.

He attended Pentecostal prayer meetings and there met a Baptist minister in need of an organist. Gee offered his services and enjoyed seven years of tutoring under this man of God. During the first world war he had opportunity to preach in a country hall. He promoted the Second Coming of Christ and the Pentecostal experience, which people “tarried” for in those days.

At the age of 29 he became pastor of a Church in Edinburgh, and in 1924 was “one of the 15 foundation members of the Assemblies of God in Great Britain”.  Eventually he was chairman of its board.

His Bible teaching ministry took him around the world.  He founded and edited World Pentecost magazine on behalf of the global Pentecostal movement.

Initially seeing no need for “teachers” in the Pentecostal experience he later came to realise the deep need for clear doctrine and effective instruction. In 1951 he was appointed principal of the A.O.G. Bible College in Surrey, England, where he practiced his conviction on a new generation of ministers. He did much to promote the ministry gift of ‘Teacher’ among Pentecostals.

The Dictionary of Pentecostal and Charismatic Movements describes him as “renowned for his judicious counsel and the thoughtful care with which he avoided extreme positions on issues of contention within the Pentecostal movement”.  He was known as “The Apostle of Balance” (pages 330-1).

Lester Sumrall, who knew him personally, tells how Dr Gee “often said, ‘What we need is balance’” (Pioneers of Faith, page 77).

This man of God died in a taxi on 20 July, 1966 – returning home from the funeral of one of his best friends.

At his own funeral John Carter, his friend for over 40 years said, “A gifted writer has laid down his pen. An eminent Bible expositor will teach no more. A distinguished editor has vacated his chair. A renowned author has concluded his last volume. A veteran leader has left our ranks. A great warrior has fought his last battle. Our friend Donald Gee has fallen asleep.” (from Pentecostal Pioneers Remembered by Keith Malcomson)