Nebuchadnezzar, King of Babylon, launched his second attack against Jerusalem, on March 16, 597 BC! Having such a fixed date for such an ancient event may sound hard to swallow, but the National Geographic Magazine (December, 1960 issue), assures us that it is so. And R.T. Boyd in A Pictorial Guide to Biblical Archaeology also gives 16 March, 597 BC as the date (page 153). And the footnote on II Kings 24:11 in the N.I.V. Study Bible states the same: ………… 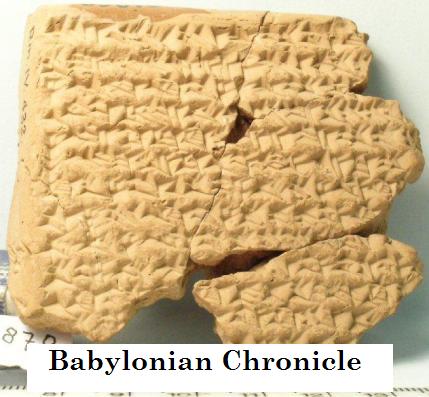 Jehoiachin, King of Judah, was taken into exile with about 10,000 of his people.  All this is confirmed by an archaeological discovery of cuneiform tablets.  One of them – popularly called the Babylonian Chronicle – tells of Nebuchadnezzar’s attack, the capture of Jehoiachin and how Nebuchadnezzar “appointed a king of his own choice” to rule in Judah – just as the Scripture says he did (II Kings 24:16,17).

And this tablet gives the date – “the second day of the month Adar”, which corresponds to 16 March on the Christian calendar!

The Babylonian Chronicle records events for the decade from 605-594BC. The first translation of the tablet was in 1956. It records three significant historical events: The Battle of Carchemish in which Nebuchadnezzar defeated Egypt’s Pharaoh Necho in 605BC; the crowning of Nebuchadnezzar to the throne; and the capture of Jerusalem.

The Chronicle account is as follows: “In the seventh month (of Nebuchadnezzar-599 BC) in the month Chislev (Nov/Dec) the king of Babylon assembled his army, and after he had invaded the land of Hatti (Syria/Palestine) he laid siege to the city of Judah. On the second day of the month of Adar (16th of March) he conquered the city and took the king prisoner (Jehoiachin). He installed in his place a king of his own choice (Zedekiah), and after he had received rich tribute, he sent (them) forth to Babylon.”

Once again the spade of the archaeologist confirmed the inspired record.