William Holman Hunt was born to a puritan family in Cheapside, London, on April 2, 1827.  By the time he was four he was “begging for a brush and some paints” … and his love for art never faded.

A clerk from the age of 12 to 16 years, he attended drawing classes in the evenings and then left the commercial world to pursue art. He supported himself by making copies from popular pictures and portraying friends. He also pursued his studies at the British Museum and the National Gallery.

Influenced by John Ruskin’s work, Modern Painters, Holman Hunt codified his own principles of art, and kept to them throughout his life. Those principles were: “full transferring of nature, adherence to the inward emotional experience, pedagogical role of art, maintenance of the national traditions, revival of medieval craft and art system”.

His first canvas to interpret these themes was Rienzi vowing to obtain Justice, exhibited at the Royal Academy in 1849.

In 1854 Hunt went to the Holy Land to portray scenes from the life of Christ, aiming to achieve total historical and archaeological truth and thus bring more authenticity to his Bible studies. He returned to Palestine in 1869 and again in 1873.

Among his masterpieces is The Light of the World (painted in 1853), which hangs in Keble College Chapel, Oxford, and The Scapegoat (1854), which was painted near the shores of the Dead Sea.

His Shadow of Death (1869) depicts the Lord Jesus in His youth, stretching after a hard day’s work in the carpenter’s shop, and Mary, peering around the door, sees His shadow, in the shape of a cross. 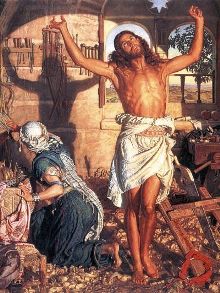 King Edward VII awarded Holman Hunt the Order of Merit in 1905. The Art Journal of 1905 notes that “Holman-Hunt has never merchandised his art, but ever used it as a vehicle of truth and of beauty.”