The first three lessons in this series were devoted to Recognising things, by paying attention. Before moving on, I reiterate that your ability to pay attention is the most powerful tool you bring to your study and learning career.

Yet there is more that can be built upon that foundation and so I come now to the second key study skill, which is the good old faithful, “Repetition”. 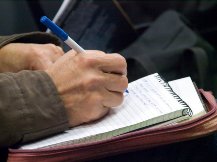 There are various statistics touted around at times about how little we take in from seeing, hearing, reading and so on. While the figures vary the fact is the same. We are not good at absorbing things. So repetition is important right from the start.

Haven’t you noticed that something suddenly became significant to you the third of fourth time you read it? Or you suddenly noticed something in a text you had read and re-read many times.

That’s why going over your notes, re-reading a text, reviewing the subject, having a discussion with a tutorial group, and so on, prove to be so important in our learning and study program.

My emphasis on Repetition, however, goes beyond the need to make sure we have Recognition. While hearing it all one more time will help people catch on to something, I am interested in the repetition process as a means of creating a Big Blob.

If a piece of information is important, then you need to give it higher significance in your huge bucket of data. You want that tiny blip of information to become a Big Blip!

When you repeat something, over and over again, you build upon that tiny blip and expand it into a large enough piece of information to be readily accessed. See it like a tiny drop of blue paint on the ground. If you keep dripping extra tiny drips on top of the first one, you eventually get a big blue blob. What was initially un-noticeable has become very obvious.

That’s what you want to happen inside your brain.

When I was a child (OK it was aeons ago!) we learned our multiplication tables and other facts by rote. We chanted them, song-like, over and over again. “Two threes are six! Two fours are eight! Two fives are ten!” And so on it went.

The teacher wrote down the side of the blackboard a list of key facts, such as the speed of light, speed of sound, number of ounces in a pound and number of yards in a mile. Multiple times each day she asked us to stop what we were doing and to read the facts in unison.

This is what is called “Rote Learning”. It fell into disrepute some years later, even though it had been a proven method for a long time. Discovery learning became the buzz for a few decades, and other experimental methods. Academic standards dropped away, reading levels fell, spelling skills crumbled and people needed calculators to do simple maths. But that’s another story.

What I want you to realise is that Repetition Works! When you drill yourself with information, repeating it multiple times, in various settings, at various times of the day, you build up the mental signal of that information, making it a more permanent and significant element in your memory and understanding.

Rather than hammering in the information in its one shape and size, you can repeat it into the memory in a new packaging. It’s the same information, but by modifying it in some way it finds a larger place in the memory banks.

As the simplest of examples, “two three’s is the same as three two’s”. At a more meaningful level, we can help our memory of the name of Julius Caesar’s killer, Brutus, by linking it to Caesar’s question, “Et tu Brute?” (Even you Brutus?)

Adding detail to a fact builds the size of the information in your memory banks. For example: Captain Cook discovered Australia. We can expand that fact with his first name and other information. He is Captain James Cook, who sailed in a ship named the Endeavour. He was killed in Hawaii.

And you can even add some nonsense to help if you like, such as the silly school-yard song some Aussie children would sing. “Captain Cook chased a chook all around Australia. He jumped a fence and tore his pants and landed in Tasmania.” I think I hear you say, “That’s not much help to me”, and you may be right.

While the repetition I just suggested involved repeating the information by expanding it, another way to repeat something is by distilling it. In this process you summarise and reduce the information to a very potent capsule, rather than a barrow load of verbiage.

The Walk Through the Bible program links a key word with each book of the Bible and then links the key words together in a set of physical movements. Thus the list of Bible books and their content is summarised in short routine. This is an example of distilling a great deal of information into a much smaller capsule.

Mnemonics and acronyms also achieve the same result. I learned “Harry ClAgNaK” to remember elements with a valency of 1. ‘Every Good Boy Deserves Fruit’ gave me the names of notes on the treble clef lines. The acronym HOMES is a mnemonic aid to remember the names of the North American Great Lakes: Huron, Ontario, Michigan, Erie, and Superior. And the planets in order from the Sun are remembered by: “My Very Elderly Mother Just Sat Under the North Pole”.

I distil the essential elements of faith, from Hebrews 11:6, down to two words, “Can” and “Will”. If you believe God Can do it, and that He Will do it for you, you have released your faith into action.

The key points made by Jesus in the famous Sermon on the Mount, could be linked to the relevant laws which Moses received in Mount Sinai. The Mosaic Law was given new light by the Law of Christ, and both were presented on a mountain. Linking those two separate and significant events allows each one to support the other in our memory and understanding.

Some of the memory tricks that are promoted include linking important facts or things to remember to some pre-determined set of references. For example, the old “One, Two, Buckle my Shoe” poem leads to a list of items which points can be linked to in numeric order: Bun, Shoe, Tree, Door, Hive, Sticks, Heaven, Gate, Pine, Hen.

I don’t mean to prompt you to be too clever. The Study Skill key is Repetition, plain and simple. Good old “Rote” is as good as you need to get, to drill yourself and pump that info in, over and over again, until it sticks and won’t fall out.

Start with Recognition, then get working on Repetition. Once you have those two working well, you are a strong student and a good learner.

To see the other posts in this series click the links below….