It has been said that society is held together by a thin veneer. Recent history reveals that supposedly civilised and sophisticated societies are able to dissolve and disintegrate into social collapse.

So, what is it that causes such social dissolution? What is it that holds societies together, so they don’t collapse? How can we best protect our own society from unravelling under duress?

The six days of rioting and looting in Los Angeles, incited by violence against a helpless black American, shocked the world, back in 1992. Images of people looting shops, running rampant in the streets, damaging their own social infrastructure and creating mayhem seemed completely out of place in American society. 13 people were killed in those riots and 192 were injured. 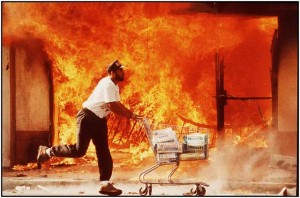 That event and others like it involved two overt elements. The uprising was sparked by outrage. The local community was outraged that one of their own people was treated so badly. Outrage fed opportunism. The emotion that prompted people to react opened for them the opportunity to loot and steal, vent their anger in destructive ways, and indulge their passions without restraint.

While other factors were doubtless involved, the combination of outrage and opportunism, unrestrained reaction and unrestrained greed, quickly prompted social collapse.

We also see examples of deprivation leading to social decline and ultimate collapse. I recently heard a chap from Cuba reflect on the impact of continued and chronic deprivation of the most basic resources. One day he returned home from a store rejoicing that he was actually able to buy toilet paper for the first time in many months. He looked at his purchase, realised how absurd his excitement was and thought, “What have I been reduced to?”

Continued deprivation of basic elements of life “reduces” people to their baser instincts. Competition becomes fiercer. Small gains, which are inconsequential under normal circumstances, become huge personal victories in the distorted thinking of a person under duress.

Societies have dissolved into social jungles where each person relied on their animal instincts and wits to survive. People have betrayed their own family members, distrust has become the norm, exploitation has become the expected thing and there have been no bounds to what one might do to another.

In the Bible, God warned His people that if they rejected Him He would put them under such duress in famine that they would eat their own children. Even the most delicate and inoffensive person would be reduced to lying and murder, without any care for their own children or family.

“And you will eat the flesh of your sons and daughters, in the siege and restriction with which your enemies will distress you: So that the tender and very delicate man among you will have an evil eye toward his brother, wife and his remaining children: So he will not give them any of the flesh of his children whom he will eat.” Deuteronomy 28:53-55

Imagine a situation where perfectly tender and delicate people become jealous and selfish in eating their own children and keeping the flesh from the rest of their family. It is an ugly suggestion. It occurs when all sense of civility is dissolved and people are reduced to animal instincts.

We have seen under Communist oppression and in situations of despotic rulers, that fear and betrayal have become the rule of daily life. I recall a friend telling me that when they escaped from Albania, many years ago, their mother did not even tell her husband what her plans were, because she could not trust him.

The mother and children escaped across a lake to Macedonia. The father’s ignorance of their plans not only spared them from potential betrayal, but allowed the father to protest to the authorities that he truly had no idea of the plan.

Under situations of political oppression people prove willing to condemn their friends and family. They betray those who care for them. They live in fear of betrayal. Trusted friends become enemies. Social norms dissolve to fearful and treacherous living.

Abraham Maslow proposed his hierarchy of needs in 1943, where people who are more provided for are expected to become more thoughtful and altruistic. While this is a nice idea, it reduces people to mere respondents to socio-economic conditions. However, the human heart operates independently of our level of provision. 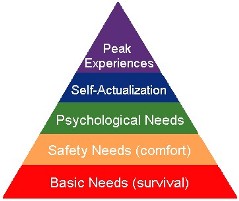 Rich and well provided for people are perfectly able to act in totally selfish and exploitative fashion. Evil continues to be perpetrated, even in the most well provisioned societies.

Similarly, not all people who are deprived become full of fear or treachery. The matter is not one of provision, but of the heart of the people involved. While deprivation brings out the worst in people, it is not true that all people have evil waiting to surface.

True nobility of spirit brings us to a place where we do not respond differently, no matter what circumstances we endure. The Apostle Paul said of himself, “I know how to be abased and how to abound”.

“I know both how to be abased, and I know how to abound: every where and in all things I am instructed both to be full and to be hungry, both to abound and to suffer need.” Philippians 4:12

Paul’s role model was Jesus Christ. Jesus was persecuted, victimised, tortured, falsely accused and then killed, yet without any dissolving of His person or His divine purpose. When He was reviled He did not respond with a retort.

“….. Christ also suffered for us, leaving us an example, that you should follow his steps ….

Who, when he was reviled, reviled not again; when he suffered, he threatened not; but committed himself to him that judges righteously” 1Peter 2:21,23

Yet the Apostle Paul, the follower of the example of Jesus Christ, taught us to live independently of the evil which is projected against us. We are not to be overcome by evil.

“Be not overcome by evil, but overcome evil with good.” Romans 12:21

Having a right heart attitude enables us to be independent of the evil which surrounds us or which is inflicted upon us.

Back of the Bus

I once heard a gracious, elderly black American speaking about the days of discrimination. Some of his friends were agitating out of anger toward the white communities. His response amazed me. He said, “Jesus Christ would have been happy in the back of the bus, so why can’t I be happy there too?”

While some of his friends were being overcome by anger, vengeance and similar passions, feeding into a spirit of rebellion and violence, this man was able to endure the same oppressions without being overcome by the evil.

I hardly know the meaning of duress. I live in privilege compared to the situations which confront most others in the world. So I don’t want to sound pious. I have no real idea what true oppression is like for those living under it.

I know that when I am under what we spoilt westerners call duress, being overly tired, having my plans frustrated, being put under performance pressure that is more than normal, then my patience wears thin. I become less tolerant, more frustrated, more selfish for my own needs, and so on.