Pilgrim had followed the “Do Right” trail and knew it was a good and wholesome way to go. But one day he decided to try out the forbidden “Please Yourself” path. His excursion seemed to do him no harm and he could not understand why that path was so warned against.

However, rising within him were stronger urges to pursue pleasure than he had ever felt before. He had lit a fire and that fire burned insistently within him. He was being drawn aside, to pursue his own lusts. 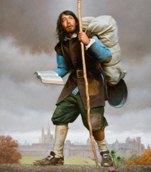 Yet Pilgrim rationalised that he could have both the forbidden pleasures and his commitment to the “Do Right” trail. The two ways were close at times and crossed each other on occasions. So surely, he thought, he could have the best of both worlds.

Then, before he ventured along the “Please Yourself” path again, he met the man who designed it. He was told that the only rule for this tantalising alternative route was to “Please Yourself”!

Spying a babbling brook Pilgrim hurried to it and sampled its refreshing waters. Then, fearing his companion might catch up and discover him from the “Do Right” trail, he moved into the sweet shade of leafy trees.

From there he saw fruit trees and went to sample the fruit. Then he saw happy animals to play with, which made hearty fun.

His new adventure was wonderful; much more pleasant than anything from the “Do Right” trail. And, to top it off, he was not far off track and soon to join the trail again.

He praised his maker for the chance to enjoy such sweet delights and drink in such happiness. And he wondered why this path should be so badly spoken of.

Not that there weren’t difficulties on the path. When bees swarmed near him he had to get away. And when the path was slippery he had to find his own footing. But at least now he could please himself about how he solved each problem. He could divert off course, or push through with purpose. Whatever he felt was best he was allowed to do.

Back on the trail there was not the same liberty. He had to do things the right way, without the creativity and spontaneity the pleasure path allowed.

In truth, though, he would not have stuck to the trail at that point but pressed on along the pleasure path, except that he saw people he knew.

He waited for them, hoping to slip down the path once they passed. Instead they seemed intent on talking with him. They seemed suspicious that he had done wrong and wanted to warn and exhort him.

Such talk was insulting and intolerable, yet he did not wish to offend, so he gave the appearance of listening intently. His mind, however, drifted off to things he had seen and enjoyed on the side path.

As they walked Pilgrim caught glimpses of the mountains ahead and began to resent the hard road under his feet. Restrictions and a disciplined journey now offended his senses, freshly awakened by his recent excursions.

With each step Pilgrim felt all the more resentful of doing right and all the more determined to please himself as soon as he could.

Before long those on the “Do Right” trail recognised that something was wrong. They exhorted and cautioned him to get his heart right, but he resented their meddling. They could not understand what he felt, for they had never tasted the delights of the “Please Yourself” path. Their cautions, therefore, were empty and vain.

And so it was, when he next had opportunity, Pilgrim snuck onto the side path again and dashed into the woods. From there he searched out every meadow, drank from every brook and tasted every fruit.

This time, however, the delights were not so sweet. Somehow his tongue had adjusted to the tastes and would not be tantalised. The meadows seemed not so soft, nor the bird song so sweet. So he pressed on for better places, determined to truly “please” himself.

One time, stumbling near the “Do Right” trail, his old companions pleaded with him to come to his senses and get back on track again. Yet, despite how elusive were the pleasures he sought, he knew they did not exist at all on that hard trodden trail.

After many years it was reported that someone caught sight of the lost Pilgrim. His face was hard and his manner set. There was no joy in his face or light in his eyes. Yet he still chased the elusive pleasures with determination.

His heart was set against the “Do Right” trail, convinced it could never make him happy. Yet he could not see that his “Please Yourself” path had failed him. Nothing was to his liking. His senses so demanded gratification that even the most precious things could not appease them.

He had sampled every fruit and seen every place. He had splashed and played and eaten, as often as he chose. Yet breezes could not touch him and flavours seemed insipid. Sounds could not attract him or vistas ever please.

He had believed a lie, that happiness is found in its pursuit. Yet life is not about pursuing happiness or finding pleasure. To pursue them is to shut down the very mechanisms that perceive them.

The old Sunday School song, “I Met Jesus at the Crossroads”, speaks of two paths meeting at a cross-roads. It says,
“Satan too was standing there and bid me “Come this way.
Lots and lots of pleasures I can give to you today.”

So, the truth expressed in this Pilgrim story is not new. It can be traced back to The Garden of Eden, where the devil tempted Eve with exactly that proposition. He effectively told her, “If you do what I suggest, you will have better things than you presently possess!” (see Genesis 3:1-6)

We are each challenged to live for ‘self’ or to restrain self in order to worship and obey God. When we give in to ‘self’ we put ourselves above God. That is treason! It brings God’s judgement upon us, but also brings us under the power of sin. We are then denied the joy of life and trapped into an empty pursuit of self-fulfilment.

When, on the other hand, we submit our selfish desires to God, and die to them, learning to do what is right, no matter how hard that may be, we find fulfilment, joy, peace and divine blessing which cannot be found by a self-led life.

If you have been seduced with the idea you can make yourself happy, stop to take stock. Has living for self brought you all the rewards it promised? Have you become slave to impulses, and have you found that life does not satisfy the way you thought it would?

Have you become addicted to things which you know are evil? Have you lost control of your life to such things as anger, lust, unhappiness, shame, fear, grief, resentment, unforgiveness, and the like?

The only viable track for anyone to follow is that of humble submission to God. The “Pilgrim’s” path is your created destiny. And it is much more wonderful than the world has made it out to be. It will offend your lusts, but it will also set you free from them. It will offend your selfish desires, but it will deliver reality which selfishness can never begin to provide.

It is time for you to get back on track. I challenge you to humble yourself before God and repent of living for ‘self’. Ask God to forgive and to heal you of your years of folly, trying to please yourself. Ask Him to cleanse you and then to lead you in the paths of righteousness. Then, let Him build eternal relationship with you and bring you to fulfilment and joy that you never thought possible.

I have a poem about Pilgrim’s pursuit of pleasure. I’ll share that with you in Pilgrim Pleasure 3.