Strange as it sounds, some rejection sufferers become rejection addicts. They live their whole life as if they need more rejection.

Now, that sounds totally absurd and you would think that no-one would be silly enough to want to be rejected. Yet I have observed this in people through the years and I declare that it is so.

People who have only known rejection all their life find that they only truly feel comfortable in a context of rejection. When they receive affection and affirmation they feel insecure. While they long to be loved, they find that love is foreign to them, while rejection is the familiar ground on which they feel safe. 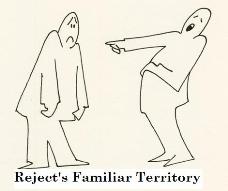 Rejected people have been known to offend those who show love to them, and otherwise do things to prompt the affirmation giver to reject them. At times rejected people can be downright obnoxious and offensive, biting the hand that feeds them. They can be arrogant, surly, distrustful, abusive, cruel and violent, to those who reach out to them in love.

One explanation for this bizarre behaviour is that the rejected person does not trust expressions of love. They expect the person reaching out to them to let them down, hurt them or even abuse them. So they test the character of the love offered them, by rejecting it.

If a person persists in offering love, the reject can increase their negative reaction, looking for the point where the carer walks away. When people give up on them they feel morbidly satisfied that they have proven to themselves that those people did not really care about them.

The Abused as Abuser

In this process the abused becomes an abuser. I have been verbally attacked, falsely accused and actively rejected by those I have reached out to. At times the rejection has had quite a sting to it, revealing how toxic the poison in the rejected person has become.

The Bible warns that when we take up a “root of bitterness” we defile many others. And that is what these rejected people seem to be doing.

I think of a deeply rejected man I met years ago who showed no grace to his children. He insisted on cutting their hair by putting a pan over their heads and cutting around the edges. The result made the children look stupid and made others taunt them. But the father was resolute. This is how he had been treated and so he would treat his own children that way.

This is the process of denying others a chance for the things the rejected person missed out on. It is as if they are saying, “If I had to suffer rejection, then you will have to too!”

Part of the explanation for a rejected person rejecting others is the issue of insecurity. Rejection sufferers feel insecure. Being presented with the new experience of affection and care awakens those insecurities. They will then reject those overtures, as much for their own comfort and stability, as for any other reason.

“Better the devil you know, than the one you don’t know” seems to be the unconscious rationale for staying on the familiar ground of rejection, even though it is toxic ground.

Rejection as a Lifestyle

Many of the things I have identified so far as reactions and responses to rejection are expressions of rejection toward others. Distrust, isolation, cutting people out of their life, putting up barriers, keeping people at a distance, being false with others, being rebellious and escaping into self-pity are all actions which offend or put a demand on others.

Thus the rejected person can spend their whole life orbiting around their rejection, being rejected and offending and rejecting others.

The Bible has much to say about setting the captives free. People are described as being in prison and being bound by the enemy. Evil spirits are shown to dog people’s lives and bring about adverse things in their lives.

All of these expressions can be related to the rejection sufferer. They are caught in a trap which they cannot escape from. Their rejection is a prison, and a prison in which they are happy to remain enslaved.

The spirits of rejection, fear, distrust and insecurity become their familiar ‘friends’ to which they remain chained through their life.

But, Praise God! Jesus came to set the captives Free! Jesus came with an anointing that opens prison doors and lets the prisoners go free.

Pray for the Addicts

If you have loved ones and family members who are addicted and enslaved to rejection, please pray for them. Jesus sets the captives free. Jesus opens prison doors. Pray that God completely release them from that which holds them in the muck and keeps them from their precious divine destiny in the “glorious liberty of the children of God”!

“The Spirit of the Lord GOD is on me; because the LORD has anointed me to preach good tidings to the meek; he has sent me to bind up the broken-hearted, to proclaim liberty to the captives, and the opening of the prison to them that are bound; To proclaim the acceptable year of the LORD, and the day of vengeance of our God; to comfort all that mourn; To appoint unto them that mourn in Zion, to give unto them beauty for ashes, the oil of joy for mourning, the garment of praise for the spirit of heaviness; that they might be called trees of righteousness, the planting of the LORD, that he might be glorified.” Isaiah 61:1-3