Not everyone is prepared. The same disaster will affect people differently. Everyone will have made different contingency plans.

Yet some will think it “unfair” that others were better prepared than them. People who are wise will get a better outcome than fools. Yet the fools will likely resent the difference. Hmmmm…

So, where are you when it comes to preparation? Have you made good plans?

You have all heard that “ignorance is bliss” but it is not true. Ignorance is painful. You cannot be ignorant and make wise decisions at the same time. If you are a fool you will have plenty of reasons to regret it. 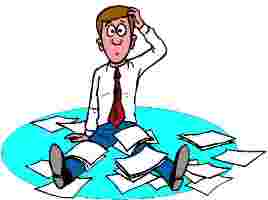 Jesus warned that the easy way, through the broad gate to the broad road, leads to destruction. It is a narrow gate and a more restricted way that leads to life.

A friend once attended a defensive driving course and told me it was all about being prepared. He was told to not simply follow the tail-lights of the car in front of him, but to look further ahead down the road. If he paid attention to what was going on ahead of the car ahead of him he would be better prepared and safer than if he just followed the leader.

That defensive driving key applies to the whole of life. You don’t have to end up in a mess, if you will only pay attention, do your homework, take responsibility and not just follow the easy way with those around you.

My brother and I both left Sydney University before our course was complete. I wanted to go to Bible College in the USA and so I left my university degree to raise money for theological studies. My brother also left his course and we worked in the same factory together. He helped in the office and with the accounts, which was his area of study.

After a year my brother announced he was going back to uni. I was shocked. I asked him how he could do such a thing. He advised that he had simply deferred for a year.

Defer! I didn’t even know you could do that. I “Quit!” I was gone, but he was simply on leave.

What troubled me was that I did not know the option of deferment even existed. I had not sought counsel. I had followed my heart and did what I believed was the only thing to do.

Mind you, I would not have gone back to my old course. I have no regrets about the decision and outcome, but I had a wake-up call about my awareness of my options and the bigger picture.

Some years ago I knew several people who placed money into a risky investment. When it fell over they lost their money. I asked one chap how he felt about losing his money. He replied, “Oh, I didn’t lose any money! I had it in a special arrangement where my money was not at risk.”

He knew something my other friends did not know. He placed money into an account, but did not allow the funds to be transferred until certain conditions were met.

Now, how did he know to do that? He obviously made some effort to be better informed than others.

“A prudent man foresees the evil, and hides himself: but the simple pass on, and are punished.” Proverbs 22:3

People you hear squealing about some new regulation, the economy, the weather, new social changes, or whatever, are probably the ones who are unprepared. They may be the simple ones who walked straight into trouble because they could not see it coming.

I’ve given you the picture. The question now is, are you prepared? In fact, are you one of the wise or one of the foolish?

If you investigate things yourself and take courses of action independently then at least you are not just going with the mob. If you are carefree and careless about these issues then I caution you to pay attention to the contingency plans you need for yourself and your family, and to keep these things in mind through the whole of life.

I am serious about your need to deal with these issues. So I’ll bring this up again with you soon in Contingency Plans 2.