I have already opened the subject of contingency plans with you. I have shown that if we go with the flow and follow the broad way we will head to destruction. We must that the road less travelled in order to be prepared for the challenges which will come our way.

Wise people check things out and are ready for the evil ahead. Foolish people just blunder on and end up in pain and trouble. King Solomon said that in Proverbs 22:3.

Not all people are equal. Communism and socialism seek to equalise everyone, but people are different not only in terms of age and strength. People generate different outputs and have different levels of protection around them.

The rabble is made up of simple people. They rush to the left and the right and end up in the ditch. Often they will be resistant to the help they need, because they will not respect or receive the wisdom that is offered to them.

The wise accept instruction and correction and even love those who rebuke them. Fools become angry and incensed when they are told their faults or given good advice.

I often hear people discuss situations they are in and I quickly see that they are no prepared. Many people have never looked into the information given them. They blindly accept the populist ideas and have no protection from the inevitable tide of trouble coming their way.

How many times have you skipped reading the paperwork? How often do you simply get a quick summary of the facts from one of your friends? When you do that you are accepting the cultural notions, and not necessarily the facts of the situation. You may be the blind one being led by the blind!

But being prepared is not always easy. It can be costly in terms of money, time, energy and attention. Choosing the right selection, making the right plans and taking the correct precautions can be challenging tasks. 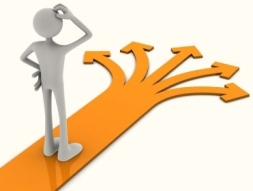 So the challenge is to “be prepared”. Stop playing “follow the leader” and running with all the sheep. Step out of the path of ignorance and start climbing the hill of responsibility.

I love the idea of an easy ride. I’m an Aussie. I have been raised in a culture where our motto is “She’ll be alright mate!” This is to say that if we don’t do anything it won’t really matter. We are not culturally trained to be responsible or well informed. Aussies are just as likely to espouse empty opinions as anyone else on the planet.

So it is not easy for me to admit that life is not an easy ride. Malcolm Fraser, an Australian Prime Minister, once quoted George Bernard Shaw’s saying that “Life wasn’t meant to be easy!” He was ridiculed for saying so, but it happens to be true.

And remember that Jesus points us to the narrow and restricted path, not the easy, “go with the flow” path that everyone else is on.

That does not mean that life is meant to be downright impossible. But it does mean that we cannot be too complacent or casual about proper preparation for the life ahead.

What Will You Do?

Conspiracy theorists have all kinds of concerns about what the world might be in for in the next few decades. Forced injections, implanted identity chips and concentration camps for citizens in America and other first world countries are just some of the ugly spectres found in their materials.

Overwhelmed By The Moment

My muslim friend from Boznia fled to Australia during the ethnic and religious warfare late last century. As the trouble spread he talked with his best friend, a non-muslim, and they both agreed that they would never do anything to harm each other.

However just a few weeks later that very friend was part of a vigilante group which expelled the muslim from his home. The friend said, “What else can I do?” He would have been expelled himself if he had stood up for his friend. All the best in intentions in the world were swept away in the crisis.

So, are your preparations disaster-proof? Or will they be overwhelmed in the heat of the moment?

The most powerful and important preparations are those you make with God. Being a son of God by faith in Jesus Christ is essential. You then access the many blessings that God has for His children, including wisdom, security, grace, blessing, forgiveness, and more.

But even there, keeping a Bible under your pillow won’t help you. Reading it and feasting on God’s words to you will do vastly more than simply owning a Bible.

Shallow, token prayers will never be as helpful and powerful as Spirit-anointed intercessions. Culturally sensitive sermons will be far less helpful than the truth of God’s Word preached fearlessly. Living your life the way it suits you will make you much more vulnerable than to determine to do all that God asks of you, His way.

God promises to give you wisdom if you ask for it. So if you feel incapable of knowing what to do, ask God for the wisdom He has promised you. Commit your ways to Him, cry out to Him and let God be your deliverer.

“If any of you lack wisdom, let him ask of God, who gives to all men liberally, and does not rebuke; and it will be given to him.” James 1:5
“Whoever calls on the name of the Lord will be saved.” Acts 2:21
“Then they cried to the LORD in their trouble, and he delivered them out of their distresses.” Psalm 107:6

Ignorance is Your Own Fault

If you remain stupid, foolish and ignorant, then don’t blame anyone else. It is your fault.

If others get through the storms better than you, then don’t resent their foundations, but learn from their example. Don’t build your life on the sand of human opinion and cultural conformity.

Your life is your own. Others will betray you, fool you, and set you up for destruction. But you, and only you, can choose to change all that by stepping into the light of God’s truth and taking responsibility for the rest of your life.