Some women struggle with their tongue. So here is practical advice for wives and mothers and for others who end up creating trouble through their words. The point is to stop contending and start sharing. Let me explain.

The Apostle James, Jesus’ younger brother, warned that the human tongue is impossible to tame. Everyone says the wrong thing at times, and those who rule their tongue have mastered their whole life.

“For in many things we offend all. If any man offend not in word, the same is a perfect man, and able also to bridle the whole body.” James 3:2

“But no man can tame the tongue; it is an unruly evil, full of deadly poison.” James 3:8

Only God can empower us to tame our tongue. So we need God’s wisdom and His grace and power to succeed in this important challenge. 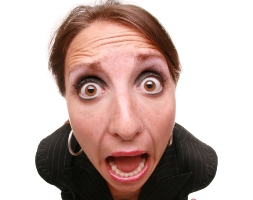 It is significant that the Bible makes several references to an argumentative woman. On three occasions King Solomon advised that you are better off living on the rooftop or the wilderness rather than with a woman who wants to argue with you.

“It is better to dwell in a corner of the housetop, than with a brawling woman in a wide house.” Proverbs 21:9

“It is better to dwell in the wilderness, than with a contentious and an angry woman.” Proverbs 21:19

“It is better to dwell in the corner of the housetop, than with a brawling woman and in a wide house.” Proverbs 25:24

We know that men, women and children can all be argumentative, so the points made in this lesson can be put to use by us all. But the argumentative woman is clearly bad news and a common enough reality for repeated mention in the Bible.

Let’s look at the dynamics that occur in contention and argument. Contending is a form of fighting. Two people become adversaries when they contend with each other. One or both are trying to gain some victory over the other. Or one is trying to defend against the demands of another.

Many husbands comment on how their wife “nags” them and how she will not let up on some point or other that she is trying to press upon them. Solomon even refers to this.

“A foolish son is the calamity of his father: and the contentions of a wife are a continual dropping.” Proverbs 19:13

The Roots of Contention

Contention springs from pride. King Solomon points out that contention only comes when pride is involved.

“Only by pride comes contention: but with the well advised is wisdom.” Proverbs 13:10

The pride that produces contention is linked to a person’s desire to rule others or to judge them. We know that from the Hebrew word for contention, ‘midyawn’, which comes from a Hebrew root word meaning to rule and to judge.

When a person is given to contending with others they are most likely motivated by pride in their own opinions or their own importance, and will feel they have the right to rule others and to judge them.

A contentious person can often operate as “judge, jury and executioner”. They take rulership over others and execute judgement upon them. They will do this purely on their own account, according to their own opinions and evaluation of a situation.

I suspect that one of the motivations for some women to become argumentative and contentious is that they feel powerless. They feel the need to gain control over their husband and children, so they are not so vulnerable.

The godly challenge for women, however, is to submit to their husband. So women need to find security in God, not in their powers of argument. Since it is God who asks them to submit, they can appeal to God to protect and bless them, even if they have grave concerns about their husband’s leadership abilities.

When women become secure in God’s care for them, they will not need to “rule” or “judge” others. They will be content and happy to get on with the life God gave them.

I have noticed that contentious people are quick to scoff, rebut, react and create arguments.

I recall an example from my time in New Zealand. While preaching, I asked a builder in the church for an on-the-spot estimate of the length of the building. I was showing how people develop good estimation skills. He scanned the building, then said, “Fifty Feet”. Immediately an older woman in the congregation gave a loud scoffing, “Hoh!” She clearly thought the estimate was ridiculous.

There was so much emotion in her mocking reaction that the builder later grabbed his tape-measure and confirmed that the building was within inches of the fifty feet he had estimated.

That lady had a problem. Without any ability to come up with an answer herself, she instantly and loudly contended with the very accurate information offered by someone who knew what he was talking about.

I am afraid many people who give in to contention are similarly ruled by it. They feel impelled to buy into things they are not qualified to speak about. They contend as if it was their automatic setting, whether they have anything to offer or not.

Argumentative people also seem hard to instruct. When someone shows that they know what they are talking about the contender is likely to say something like, “You think you’re SO smart, don’t you?” They are unlikely to say, “Thank You. I’m glad you explained that to me.” Pride and the desire to dominate and judge others are at the heart of contention, so the contender will be too aroused to be humble and teachable.

Note too that if people feel threatened they will resort to personal attacks, rather than argue the issue at hand. Accusations, dredging up past failures, mockery, personal taunts and the like often find their way into arguments.

There is a much better way to communicate than to argue. Even if the other person is wrong there are better options than argument and contention. And it’s that better way that I really want to share with you. Now that I’ve taken so long with these background remarks, I’ll save the “better way” for Women With Wise Words part 2, which I’ll post in a couple of days.