I love it when I see something in a completely new light. Mostly we don’t need to see “new” things, but to see the old things the way they really are. When our brains are told to interpret things one way or another we can be effectively brain-washed by that instruction. Somehow we overlook the evidence and keep interpreting it according to the definition or label we were told to apply to that thing.

Many of the things we “know” are only things we “believe”. We “believe” them to be true, and thus think we “know” them. But, alas, we are deluded, and are even blind to an accurate interpretation because of the pre-programmed beliefs.

Praise God, He sets us free from deception, because Jesus Christ is the “Truth”! Jesus said, “I am the way, the truth and the life!”

Education involves learning to put labels on things. The bigger our set of labels the better educated we are. We are able to discern between things when we have a large enough set of labels to enable us to put different things into different categories. Hoorah for labels!

But, if we are given the wrong label for something, then we have not been truly educated at all. In fact, we have been brain-washed, indoctrinated, deceived and denied insight into the truth.

Notice that socialist economists have influenced much of modern academia on economic themes. I expect that the labels a socialist mind conceived for economic processes put those processes in a different light to a Biblical economist, or a capitalist economist.

Let me get toward my point. We have all heard mention of the two forms of motivation, the carrot and the stick. Carrots are positive inducements that prompt people to action. The stick represents negative inducements to action. A carrot might be a bonus for completing a task on time. A stick might be a punitive outcome if the task in not completed on time.

Management theory has addressed the competing tools of the carrot and the stick. And these labels have had a “reductionist” effect on human thinking.

Most people’s first thoughts about motivating themselves or others will orient toward either or both of the carrot and stick. These two categories tend to dominate and thus obliterate perception of alternative possibilities.

Many people do what they are asked to do and perform well, simply because that is their choice. They are not motivated by the carrot or the stick, but are simply doing what they have been programmed or trained to do.

Some people make a greater effort out of concern for others who they see under pressure. They pitch in out of social motivation, based on their sense of shared responsibility and their desire to see their friend aided in a difficult situation.

Some people simply love a challenge. They are motivated by realisation of a need and the definition of a clear challenge to overcome that need. The feeling of “We did it!” is all the reward they need.

Biblical Parenting involves use of the “stick”. King Solomon instructed humanity thousands of years ago to train children by using words and physical discipline. The old English translation, the King James Bible, uses the word “rod of correction” to describe the stick that is used by parents to train their children.

“Foolishness is bound in the heart of a child; but the rod of correction will drive it far from him.” Proverbs 22:15

“He that spares his rod hates his son: but he that loves him chastens him as required.” Proverbs 13:24

Influenced by the “carrot and stick” labels, how should we interpret the use of the “rod of correction” by parents? It is seen as a punitive, negative reward. It is seen as the opposite of the more positive encouragement inducement or positive reward option.

In a “carrot and stick” world, use of the “rod of correction” is seen as the ugly choice. Caring, sensitive, compassionate, New Age parents think they can discard the cruel ancient wisdom of Solomon and embrace more advanced and enlightened methods of training their children. Such parents aim to use rewards, coaxing, mature negotiation and other alternatives to the offensive “hit the kid with a stick” option.

The “carrot” triumphs over the “stick” in today’s modern homes.

Back to the Book

The Bible was written long before the more modern discussions about the carrot and the stick. And Solomon’s wisdom needs to be seen for what it is, not what the labels have brainwashed us to think it says.

So, let’s go back to the book and see what is really being said about the “rod of correction”. Let me repeat a verse I quoted earlier…

“Foolishness is bound in the heart of a child; but the rod of correction will drive it far from him.” Proverbs 22:15

The use of the “rod of correction” is not punitive in this instruction. It is therapeutic! The rod of correction has a specific and vitally important function, and it has nothing to do with motivating a person to do what mummy tells him to do.

The Good of the Child

The “rod of correction” is for the good of the child. A parent who refuses to do this good to their child is described as hating their child.

“He that spares his rod hates his son: but he that loves him chastens him as required.” Proverbs 13:24

The punitive “big stick” is for the good of the manager or the person who wants to get their project done or their will obeyed. The Big Stick is an aid to the teacher, boss, prison warden or similar role where a person in charge demands compliance.

That kind of big stick can lead to abuse and dominance of those under punishment. The “rod of correction” applied for the good of the child cannot be a tool of abuse. It is not an indulgence for the parent, but a blessing to the child.

In a recent article on Leadership, titled Leading With Authority, I made an aside about the use of force. I quote myself here…. 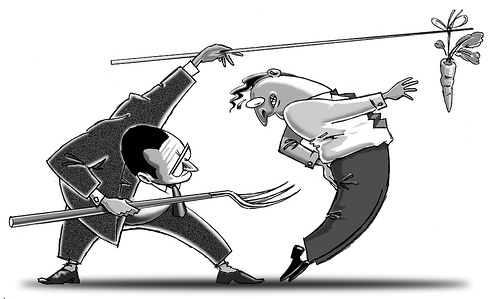 Back to the Stick

Parents need to go back to the stick. But the Big Stick is not the Big Stick! The “rod of correction” which godly parents use to train their child is not a “Big Stick” of threat and intimidation to coerce appropriate behaviour. If the stick is used as a “threat” then it is not being properly used.

The “rod of correction” is not of value because of its intimidation and the fear of its use, but by its application and its measured and appropriate use. Godly parents who wisely use the “rod of correction” to remove foolishness from their child can then get on with parenting their child without recourse to the Big Stick. They don’t need to threaten the child, or intimidate the child with the stick waved over the child’s head.

Those two concepts are foreign to each other and have created the kind of confusion that leads some authorities to seek to ban godly discipline. The Rod of Correction is not the Big Stick. It never was and was never meant to be.

It’s time for parents to go back to the “rod of correction”, for the sake of their children. Its application will only be temporary. It is not a punitive and intimidating “negative reinforcement” mechanism. It is a means of delivering the child from foolishness. Once that is done, the rod is put away and your effective parenting continues with those other Biblical training processes you have already been using as well.