OK, so that’s an oxymoron, but I’m unimpressed with those who think their calling in life is fault finding. I’m sure for some it’s their favourite past-time. Maybe they find meaning and value in such things, but I can’t believe it’s good for their spirit.

The world-wide-web has delivered us the ‘world-wide-whisper’ – speaking evil of all and sundry. And the purpose is the same today as it was in the days when King Solomon spoke against it. Oh Yeah, King Solomon had a word about the ‘web’ before it was ever invented. 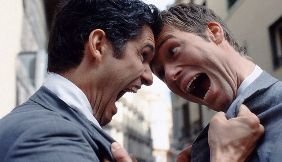 King Solomon talks in that verse about a person who is “froward”, translated from a root word meaning perverse or fraudulent. He is also talking about a slanderer or talebearer.

The purpose of such perverse passing on of adverse opinions is to create “strife”, such as argument, tension, disagreement, quarrel, contention, discord and division. And that’s what the web has been widely used for.

Everybody has an opinion. They even have opinions about other people’s opinions. The web has become an ‘opinion fest’ forum. Now, that’s great for freedom of speech, but it’s unhealthy in many respects too.

People speak from their heart, and the heart is perverse.

“O generation of vipers, how can you, being evil, speak good things? For out of the abundance of the heart the mouth speaks.” Matthew 12:34

So the readily supplied opinions of people fit easily into Solomon’s category of froward (perverse) people sowing strife. And the gossip passed on about this one or that is devilishly destructive.

In the days of snail mail the term ‘poison pen’ letter described a letter that passed on slanderous information to poison the opinion of the reader. Whether the information shared was true or not its purpose was not to bless and edify but to cause the reader to take offence against the person being exposed or accused.

Now, thanks to the wonder of modern technology, we can be baptised in poison, drinking it as readily as mother’s milk. Just do a search on anyone who has reached some prominence and discover to your dismay that a bunch of people are committed to tearing them down.

No matter how wonderful the preacher, politician, leader, businessman, philanthropist or hero there is someone in search of their dark side, ready to immerse us in a baptism in their negative opinion.

The problem is that negativity causes a shut down. It “separates close friends”. It causes something that was positive to wither and die on the spot. It is toxic. And it’s the devil’s favourite game.

As soon as you become negative about something you are shut down, at least to some degree, from the potential, blessing and benefit of that thing. I continue to be impressed with how effective toxic attitudes are.

I once bought a newly released translation of the Bible. I enjoyed its language and style and enjoyed reading my way through it. Then someone happened to mention that particular translation and gave a scathing summary of its flaws and defects.

I am experienced enough as a Bible scholar to know that no translation is perfect. They all have their limitations. I did not expect that version to be wonderful, but I was enjoying it. However, from that very moment of hearing the scathing put down I lost all heart for reading that version.

The negative comments built a wall between me and the book I enjoyed reading. A form of separation was created in an instant. And that’s what King Solomon described. The whisperer, the talebearer’s report, “separates” good friends. I was separated from the good friend I found in that translation.

And now we have millions of web sites, blog posts, forum articles and the like which are intent on separating people from things which someone has an opinion about. The addiction to finding fault has become an epidemic of offence, slander, false accusation, poison pen writings and baseless violence against the accused and those who would otherwise respect them.

If you are one of those given to tearing down others please take a moment to search your heart. Your pen is writing “out of the abundance of your heart” and it is showing your heart to be toxic. You will be a far greater blessing if your tongue and pen brought forth ‘sweet’ water, instead of the bitter water you are spouting over others.

If you are blessed with the capacity to write, why use that gift as a weapon? You are supposed to turn your weapons into farm implements that bring forth a good crop and a blessed harvest. If your tongue is a poison pen ask God to heal it and make it a source of life-giving water to those who have already consumed too much toxin.

The Lord is opening up fountains of blessing. It is His heart to bless, and to cause His rain to fall on the just and the unjust. Join the Living God in one of the most blessed professions you can ever fulfil. Join Him in being a source of blessing to others.

Bring out that which is good, noble, or good report, edifying, encouraging, enriching, comforting and God glorifying. If you find you must splash poison, then maybe writing is not your calling as yet.

Tags: be a blessing, finding fault, freedom of speech