These lyrics come from an African-American spiritual that dates back pre-1865 and was popularised by Peter, Paul and Mary in 1963.  It reflects on Moses bringing Israel out of slavery and was picked up as a cry for freedom from all who are oppressed. 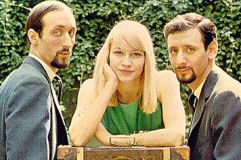 And that takes me back to writings that predate the modern Americas, from the pen of the Prophet Isaiah approx 600BC.  Isaiah experienced visitations by the Spirit of God, causing him to know what God was thinking or saying about things.  Isaiah wrote what God told him, even though he didn’t know what it was all about.

For example, Isaiah prophesied that Jesus would be “wounded for our transgressions” and “bruised for our iniquities”, would bear our sorrows and heal us by whip marks on his own body (“by his stripes you will be healed”). See Isaiah 53.  Isaiah also said the death would be linked with the wicked and the rich – so Jesus was crucified with 2 thieves and then buried in a rich man’s tomb.

Significant for freedom fighters is Isaiah’s lovely prophecy about Christ in Isaiah 61, which tells of the powerful impact of God’s people when they operate under the anointing of the Holy Spirit.

“The Spirit of the Lord GOD is upon me; because the LORD hath anointed me to preach good tidings unto the meek; he hath sent me to bind up the brokenhearted, to proclaim liberty to the captives, and the opening of the prison to them that are bound” Isaiah 61:1

Christians understand freedom at many levels, starting with freedom from slavery to sin and its eternal judgment, through the forgiveness we can claim because Jesus paid our price with his own blood.

And Christians also understand freedom from the power of sin, such as addiction, fear, guilt, shame, anger, lust, greed, pride, and so on.

And Christians also understand freedom from the power of the devil, such as inner torment, turmoil, agitation of mind, compulsive behaviour and the like.

But many Christians balk at the idea of freedom expressed in social change.

Modern Christians seem to see Christianity as a personal experience which can then spill out in influence upon family and the society of their closer friends and associates.  But to take a stand against injustice, condemn evil in the culture or challenge governments and leaders is seen as almost ‘unChristian’ behaviour.

So let’s go back and see Isaiah’s prophecy from 2,6oo years ago…..

“The Spirit of the Lord GOD is upon me; because the LORD hath anointed me to preach good tidings unto the meek; he hath sent me to bind up the brokenhearted, to proclaim liberty to the captives, and the opening of the prison to them that are bound” Isaiah 61:1

A person, or a group of people, are to have God’s Spirit come upon them, for a divine purpose.  This means that the purpose to be achieved is not one that can be done by ordinary people who are not empowered by the Spirit of the Living God.

God’s social agenda in placing His Spirit upon people involves preaching good news to people who are humble and looking for God’s help (the meek).  And it involves bringing inner restoration of heart to those who have been hurt and wounded by life’s experiences – such as rejection, shame, defeat, discouragement, loss of purpose, slavery to addictions, etc.  And it involves liberating people who are captives and opening prison doors for those who are enslaved.

So, yes, this does suggest release from slavery to sin and personal issues, such as addictions, fears, anger and the like.  But it does not exclude liberation for people who are taken captive by social injustice, tyranny and oppression.  And the prison doors are not just personal and internal.  They may also include the prison of debt and government deception.

Those liberated by God’s anointed ones may well be those who have been made into debt slaves by bank lies or government statutes that deny them their God-given freedoms.

And so I find myself engaged in a struggle to break the chains of Bank Fraud.  I never expected to be in such a situation, but I sense that it is a natural outworking of my life of service to God.  I am sure many of my ministry peers will think I have been sidetracked or caught up in something that dilutes my effectiveness in the Real Business of serving God.

But I also find myself contending with Injustice in the Courts, and tyranny and treason in government and society.

While I am first and foremost committed to the need every person has to find Jesus Christ as their personal saviour and Lord, and to become sons and daughters of the most High God through faith in Jesus Christ, and to live in the power of Christ under the anointing of the Holy Spirit, being led by the Spirit to build God’s Kingdom as He personally calls them to do so, I am also applying the gospel to wider issues.

And this past week my attention was drawn back to Isaiah 61, and the example of Moses centuries before that, dealing with the call to “Let My People Go”.  I realised that opening prison doors and setting captives free had direct connection with my attempts to release us from bank lies and injustice in the courts.

If I can assist the breaking down of these prisons and slavery then the whole culture and nation is blessed.  So, while God calls me to do so, I’m in the business of social justice, social action and social transformation.

Only Jesus Christ can truly transform lives. Only God’s Spirit can effectively empower people to achieve the changes we need.  And here I am, putting in my hat with thousands of others who have seen the oppression and cried out for release.  To the ability God gives me and with the talents and wisdom He allows me to draw upon, I am here to say, “Let My People Go”.