How tough is your faith?  Your faith is only as strong as your will to believe.

I have discussed in other articles the connection between believing and the will.  Because belief is an act of the will our ability to choose to believe and to hold to that choice is a key component of our faith.

Most of us adopt the beliefs we grow up with.  If we grow up in a Moslem, Buddhist or Christian family, we will naturally embrace those family and society beliefs. 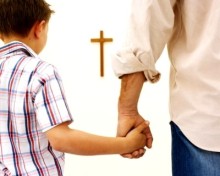 If our family keeps us in a closed community of like-minded people those easy beliefs will stick with us until they are challenged at some point in time.

Voices from outside our family, such as our teachers, the media and people who invade our world, can challenge the beliefs we grew up with.  When that happens we may discover that the beliefs are not really “believed” but simply adopted and accepted.

Advocates of evolution, for example, have been able to destroy the faith of children from Christian homes, by pretending that their theory is indisputable fact.  If the children and youth have not really chosen to believe in Christ, but simply adopted Christianity as the easy believing of their early life, they are easy targets for those who want to destroy their unanchored faith.

If, however, you have been challenged about your beliefs and then made up your mind to believe, you will not be as easy a target for those who want you to doubt.

Making a choice to believe consolidates and solidifies your faith, because faith is a choice.  When you employ an ‘act of your will’ your faith has immediately become more real and more solid within you.

That is called the “trial of your faith”, and it’s what happened to Joseph when he was told by God he would become great, but ended up in an Egyptian prison for years.

“That the trial of your faith, being much more precious than of gold that perishes, though it be tried with fire, might be found unto praise and honour and glory at the appearing of Jesus Christ” 1Peter 1:7

“Until the time that his word came: the word of the LORD tried him.” Psalm 105:19 (Joseph in an Egyptian prison)

Trial of Your Will

A trial of your faith is basically a set of challenges that test your level of commitment to keep trusting God.  The challenges are graded, so you are tested to a harder degree as time goes by.

For example, you might have a health challenge and decide to believe that God will heal you.  Your faith journey has begun by a choice to believe in God.

The first challenge might be that nothing happens in response to your faith and prayers you receive from others.  So the thought comes to your head that faith does not work and that, while others may get healed, you will not be.

Once you battle through that and decide to believe God and His word even though nothing has happened for you yet, the next challenge might be the doctor advising that your condition is more serious than first thought.  Instead of getting better you are getting worse.

Piling on the Pressure

While you are reeling with the news that faith is not helping, you might then be told that your condition is incurable and is not responding to treatment.  You might even be told it is terminal and you have a limited life expectancy.

By that point you are under a great deal of pressure.  Will you continue to believe God or will you give up?  The matter of your “faith”, then, comes back to your “will”.  WILL you hold on and keep believing, or WILL you lose heart and give up.  That could be said as “Is it your WILL to hold on?”

Consider Joseph as he worked through his trial of faith.  As a lad God gave him dreams that promised him greatness.  He saw dreams about his brothers bowing down to him.  He knew God had something amazing in store for him.  He had the “word of the Lord” through those dreams.

But his brothers despised him, threw him in a pit and sold him as a slave.  That would have challenged his faith, don’t you think?

In Egypt he managed to get a good job as a slave to Potiphar, a powerful military leader.  But disaster struck when Potiphar’s wife lied about Joseph.  The young dreamer was thrown into prison for more than a decade of his life.

We are told that Joseph was tested by the word of God, as he saw how far he was from it ever being fulfilled.

Joseph kept on believing.  It was tough, but he did it.  He knew the word would come to pass, but he had no control over making it happen.

Then in one day he was promoted to second in command of the whole nation.  The word came to pass, and he was glad to have held on to it.

Faith is linked with your personal depth and strength.  That’s what Jesus revealed in his Parable of the Sower.  Some seed fell among shallow, stony ground, without any depth of soil.

Just as a tiny plant with no depth of soil is easily dried up by the scorching sun, so a shallow person shrivels in the face of challenges and opposition.

Jesus advised that the shallow soil person gives up in the face of persecution.

“And these are they likewise which are sown on stony ground; who, when they have heard the word, immediately receive it with gladness; And have no root in themselves, and so only endure for a time: afterward, when affliction or persecution arises for the word’s sake, immediately they are offended.” Mark 4:16,17

Shallow people are easily led, but unable to take a stand.  They cannot endure trial and testing.  Yet God is looking for faith and faith is a choice to believe; an act of the will.  If your will is like jelly your faith will be weak.

The will is like a muscle.  You can develop and strengthen it, by using it.  So the “trial of your faith” is not unlike a workout for your faith.

Each time you reaffirm your faith, especially under increased load, your faith muscle, or should we call it the “will” muscle, will be strengthened, ready for the heavy challenge as the workout is upgraded.

I named this article “I Will I Will I Will” because what you need to do is keep making that choice, over and over again.  “I will believe God.”  “I will keep on believing.” “I will trust God when things aren’t working out.”

That’s the continued process of reaffirming your faith.  And you’ll watch your faith grow as you do.

Your faith journey starts when you decide “I will believe God”.  That decision will impact who and what you are.  But it is not the end of the journey.

In time various challenges will block your path.  You might be mocked, or tempted to doubt, or face pseudo-intellectual opposition and so on.  Each time you decide to continue to believe God despite the challenges, your faith is strengthened.

You may even face life and death situations where your faith stand will be sorely tested.  If you continue to make the right choice, the choice to believe, your faith will win out.

It’s as simple, and as difficult as that.