John the Baptist had an important ministry, in the footsteps of the great prophet Elijah, preparing his generation to receive Christ.

John impacted the nation of Israel and far beyond.  Decades after John’s death Paul met a group of devout followers of God at Ephesus who had been baptised with “John’s baptism” of repentance.  At the same time an orator named Apollos travelled through many nations preaching John’s messages.

Both the Ephesian believers and Apollos had to be brought up to date with the revelation of Jesus Christ as the fulfilment of John’s preaching.  Yet for John’s message to have gone so far and wide we see that the impact of his preaching is quite impressive. 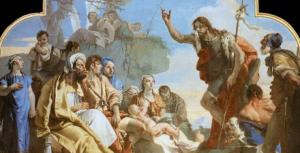 The Bible gives several insights into John’s preaching.  First mention is in Matthew’s history of the life of Christ.

“In those days came John the Baptist, preaching in the wilderness of Judea, And saying, Repent for the kingdom of heaven is at hand. For this is he that was spoken of by the prophet Isaiah, saying, The voice of one crying in the wilderness, Prepare the way of the Lord, make his paths straight.” Matthew 3:1-3

Matthew tells us that John preached in the wilderness and the summary of his message is “Repent for the Kingdom of Heaven is close at hand”.  Matthew also tells us John came in fulfilment of a prophecy from Isaiah.

Matthew’s assertion that John fulfilled a prophecy from Isaiah is confirmed by Dr Luke, who did his own research into the life and Christ and recorded his findings in the gospel of Luke.  Luke discovered that John’s father saw an angel which foretold John’s birth and said John would fulfil the very same prophecy Matthew records, see Luke 1:13-17 and also Luke 3:2-6.

Dr Luke summarised John’s preaching as Matthew did, with a simple sentence, but adding detail Matthew did not mention.

“Annas and Caiaphas being the high priests, the word of God came unto John the son of Zacharias in the wilderness. And he came into all the country about Jordan, preaching the baptism of repentance for the remission of sins” Luke 3:2,3

Six hundred years before John the Baptist the prophet Isaiah spoke about him and what he would say.  Matthew declares that John is the fulfilment of a prophecy by Isaiah found at Isaiah 40:3-8.

“The voice of him that cries in the wilderness, Prepare the way of the LORD, make straight in the desert a highway for our God. Every valley will be exalted, and every mountain and hill will be made low: and the crooked will be made straight, and the rough places plain: And the glory of the LORD will be revealed, and all flesh will see it together: for the mouth of the LORD has spoken it.  The voice said, Cry. And he said, What will I cry? All flesh is grass, and all the goodliness thereof is as the flower of the field: The grass withers, the flower fades: because the spirit of the LORD blows on it: surely the people are grass.  The grass withers, the flower fades: but the word of our God will stand for ever.” Isaiah 40:3-8

Isaiah gives a rich insight into John’s message, summarised by Matthew’s simple account.  We see that John was to preach in the wilderness, which Matthew recorded happening.  John would also “prepare the way of the Lord”, by getting the people ready to receive Christ, which the gospels record taking place.

The preparation for Christ was to involve making a straight path, lifting up the lowly, humbling the proud, removing the deviations and the bumps.  John’s simple and direct message levelled the field, directing all the people, great and small to take the same step of repentance.

All Flesh Is Grass

I love the prophetic account given by Isaiah about John the Baptist’s ministry.  The New Testament historians don’t give any insight into how this prophecy was fulfilled, so let me bring it to life for you as I see it.

“The voice of the Holy Spirit directing John said ‘Cry’! And John the Baptist said, ‘What will I cry?’ The Spirit told John to cry out ‘All flesh is grass and will wither, no matter how beautiful it looks, but God’s Word will never wither or fail.’”

So John shouts at the top of his voice, into the barren hills, “All flesh is grass. Whatever you are doing it is a waste of time.  You need to be listening to God, because He is real and what He does lasts.”

John’s voice echoes across the scrubby landscape.  And off in the distance one or two lonely souls hear him preach and are immediately gripped by the Holy Spirit.  They are cut to the depths of their heart and hurry home to get their friends and family to come and hear this voice.

So powerful was the message, given in obedience to the Holy Spirit, that an audience quickly grows as people hungry for God are gripped by this simple, humbling message.

Isaiah was not the only one to prophesy about John the Baptist.  Four hundred years before John the prophet Malachi spoke of one coming in the spirit of Elijah to impact the hearts of the people.

“Behold, I will send you Elijah the prophet before the coming of the great and dreadful day of the LORD: And he will turn the heart of the fathers to the children, and the heart of the children to their fathers, otherwise I will come and smite the earth with a curse.” Malachi 4:5,6

We know that John is connected to this prophecy because of the angel that spoke with John’s father.

“But the angel said to him, Fear not, Zacharias: for your prayer is heard; and your wife Elisabeth will bear you a son, and you will call his name John. ….. And he will go before him in the spirit and power of Elias, to turn the hearts of the fathers to the children, and the disobedient to the wisdom of the just; to make ready a people prepared for the Lord.” Luke 1:13-17

You will note in that angelic message that John fulfilled the prophecy given by Malachi.

John was a voice crying in the wilderness, so he did not start with a big city crowd.  He had to build an audience in a place where an audience was hard to come by.  And he did.

He did it by preaching what the Holy Spirit told him to preach.  The message humbled man, exposing man’s temporary and meaningless existence.  The message also exalted God, by showing that God’s Word endures and cannot be changed.

John’s message called for repentance by levelling all humanity before God, all with the same need to repent before God.  John introduced a new expression of humility, that of baptism by immersion to testify to a change of heart.

John’s message focused people on the Kingdom of God, which has two points of significance.  The presence of God challenges our sinfulness before Him, calling us to repent and seek forgiveness for our sins.  For those who have found that forgiveness, the presence of God promises God’s blessing and grace in their lives.

The depth of repentance called for by John prepared people to accept Christ.  It also changed their heart, not just to God, but toward those in authority and those they are responsible for.

A modern day John the Baptist would still preach the same message.

“Repent before God, because God is at hand.  God will judge your sin and is also ready to bless your obedience.  Stop living for personal agendas and recognise the temporariness of your life.  God’s purposes are profoundly more wonderful than all those other things that consume you.  Turn around and start living for God, in the fear of God.”

A modern day John would not start out with a big audience, but with a Spirit anointed message.  He would speak with such destiny that the message would do the job.  He would not buy and audience or rely on marketing hype to get heard.

And a modern day John would expose in people’s hearts their pride, rebellion, selfishness and independence.  He would call them back to living the way God wants them to, rather than for their selfish, secular agendas.

John Baptist’s preaching moved a nation. His message was “Repent, for the Kingdom of God is at hand”. Today that would be “Repent, for God is right here, so fear God and expect God’s blessings”.

The significance of John’s sermon is endorsed by the fact that Jesus Christ took up that same message when He began to preach.

“From that time Jesus began to preach, and to say, Repent: for the kingdom of heaven is at hand.” Matthew 4:17

Acts 20:21 “Testifying both to the Jews, and also to the Greeks, repentance toward God, and faith toward our Lord Jesus Christ.”

Just as John called people to repent, so did Paul.  The Kingdom of God being at hand was the basis for repentance.  Because God is real and is present to deal with us, we must have repentance toward God, but we also have great reward in our faith in Jesus Christ.

As I summarised it above, the message is, “Repent, for God is right here, so fear God and expect God’s blessings”.