How do you help a legalistic dad?  You know the kind.  He demands his family do as he wants, the way he wants, on the basis that he has GOD on his side.

I have had to deal with several dads over the years that have dug themselves into a hole but refuse to change because they are the DAD and the Bible tells the kids to obey them.  The children become hurt and rebellious and that only affirms to the dad that he is on the high ground and they are wrong.

I was asked recently by a Christian counsellor for some suggestions to help a legalistic dad face the mess he has created and the pain he and his family are living in.  The dad appeals to the Biblical command that children obey their mother and father as his trump card to justify his stern stand.

As I considered the question, my thoughts about sad situations I have seen over the years led me to a new suggestion to help a legalistic dad. 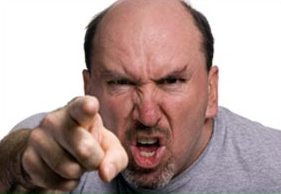 The problem is getting the dad to listen and to be prepared to review his own actions, when he has a strong sense of being “right” and others being wrong.

Jesus told us we can know the truth about people by the “fruit” of their life.  A father’s life is not measured by the legal ground he claims as his authority, but by the fruit of his actions.  “By their fruits you will know them” is a basic litmus test we can apply quite widely.

“You will know them by their fruits. Do men gather grapes of thorns, or figs of thistles?” Matthew 7:16

I suggest we can apply this to test those legalistic dads who think they are right and others are wrong.

Fruit in the Family

A child starts out as a blank page.  And children are very resilient and forgiving.  They have the ability to cope with disappointments and the distractions of their parents.  And children learn much of their concept of life by watching their parents at close quarters.

So, at least in general terms, the way the kids turn out can be regarded as the “fruit” of the family.  If a family produces selfish, proud, loud, disobedient kids, you know that the home has some serious problems.  If a home produces quiet, obedient, loving, thoughtful children, the quality of the home is attested to by those kids.

So let’s use that fruit factor as a searchlight on the legalistic dad.

Stubborn Kid from a Stubborn Dad

Humility in the Home

If the dad is looking for a spirit of humility in his children, then we need to see that same fruit in him.  If he doggedly defends his opinions and the rightness of who and what he is he can only expect his children to be as stubborn in their stand for their own rightness too.

First let’s see the dad humble himself before God and admit that he needs God’s wisdom.  Let’s hear the dad admit that he has failed in his role as dad.  When we see that kind of humility we know there is hope for the family.
If dad defies the evidence then he has invalidated his stand before God.  God gives grace to the humble, not to the defiant and arrogantly proud.

Another important truth for a legalistic dad is that the issue is not rebellious kids, but the condition of the dad’s heart.  Yes, rebellion in the family is wrong and the rebellious children need to have that resolved.  But the dad is the head of the home and it is vital to get him sorted out as a key to healing the whole family.  And getting dad sorted out means dealing with dad’s heart.

Out of the Heart

Listen to what Jesus said about the significance of what comes out of us.

“And he said, That which comes out of the man defiles the man. For from within, out of the heart of men, proceed evil thoughts, adulteries, fornications, murders, Thefts, covetousness, wickedness, deceit, lasciviousness, an evil eye, blasphemy, pride, foolishness: All these evil things come from within, and defile the man.” Mark 7:20-23

The issue that is defiling the father and likely bringing real problems into the home is whatever is coming OUT of the father’s heart.

And we know what is coming out of the heart by what people say.

A legalistic dad will speak judgment of his children, rejection, condemnation, fault finding, pride in his own standards, negativity, contention, and so on.  And those words of his mouth reveal that he is not standing on moral high ground, but is polluted.

A heart that produces evil speaking reveals an “evil heart”.  The legalistic dad has deep troubles in his heart that lead him to produce toxic speech and bad fruit.

The more a legalistic dad is challenged about his stand the more virulent he may become in attacking others, asserting that he is right, feeling rejected and intimidated and so on.

All of this reveals that the dad is not walking and living in God’s grace.

The dual matters of the “fruit” of the dad’s fathering in the home and the “issues” in the dad’s heart expressed in his legalistic stance and speech, show that the dad needs help.  The home is what it is because the dad has internal issues that need to be resolved.  He will never be able to lead his family into joy and wholeness while he is beset with personal problems that have produced bad fruit in the home and which reveal bad issues pouring out of his heart.

Legalism as a Cover

If a dad has produced bad fruit in his home and his heart pumps out evil things he has issues.  And legalism may just be a way to cope with life and excuse his situation.  Legalism may be a cover.  By being legalistic he can point at others, rather than get free on the inside himself.

Just about anything could cause a person to become legalistic, but since legalism prompts a person to reject others it is reasonable to assume that rejection has a part to play in the legalistic dad’s heart.

Certainly there is a lack of the grace of God.  And the writer of Hebrews warns that failing to receive and give out God’s grace leads us to having a root of bitterness which causes us to defile others.

“Be diligently attentive lest any man fail of the grace of God; lest any root of bitterness springing up trouble you, and thereby many be defiled” Hebrews 12:15

Legalism and the attendant accusation and rejection certainly defile and offend people so an important need in the life of a legalistic dad is to experience the grace of God and to give God’s grace to others.

Give Grace to Dad

If you suffer under a legalistic dad you will find it easy to become hurt, offended, resentful, judgmental, angry and so on.  And by so doing you will be tempted to let a root of bitterness spring up in your life.  If that happens then the problem has been passed down to a new generation, instead of being dealt with and rooted out of the family.

So if you have a legalistic dad press in to God for sufficient grace so you can give grace to your dad, even though he does not deserve it.  If you can give grace to those who have no grace, you will not come under the power of their failures and weakness but have triumphed into liberty for yourself and your children.

If your dad is legalistic and refuses to see that there is anything wrong in his life, you are in a very vulnerable place.  Determine with God’s help to give abundant grace to that graceless dad.

Arthur Tappan Pierson was born on 6 March, 1837, reared in a godly home, and converted during “special revival meetings in the Methodist church”.

At the age of 23 he was ordained in the Presbyterian ministry, and married Sarah Benedict the same year.

It was during his second pastorate that the boating accident occurred. As the boat in which they’d been fishing sank, Pierson and his three small children found themselves in a desperate situation. He could swim … the children could not, at least, not the distance to the shore. For half an hour they clung to the upturned boat, crying to any who might hear them – and committing themselves to God’s keeping. “Finally a woman heard their calls for help and came to the rescue. She had never handled oars and Mr Pierson, with his head just above water, had to direct her how to use them” (Speakers’Bible, “Judges”, page 392).

Safe home Dr Pierson wrote a “Promise to God”, thanking Him for the deliverance and promising to serve Him henceforth. The three children signed it.

In the years that followed Dr A.T. Pierson became a well-known Bible teacher on both sides of the Atlantic.

When Spurgeon took ill in 1891, it was Dr Pierson he requested to fill the Metropolitan Tabernacle pulpit. This he did … and continued to do so for a time after Spurgeon’s death.

This ministry came to a rather bitter conclusion as the congregation was divided as to whether Pierson should continue as pastor (he had submitted to believer’s baptism in the meantime), or whether Spurgeon’s son, Thomas, should come and minister. “The rift in the ranks of the membership went deep,” writes W.Y. Fullerton, “even to the severing of family relationships and sundering lifelong ties” (Thomas Spurgeon, page 155). Dr Pierson was outvoted, three to one.

Back in USA, Dr Pierson lectured at Moody Bible Institute, was a contributor to the notes in the Scofield Reference Bible, editor of the Missionary Review, author of numerous books (including the famous biography of George Mueller), and in demand as a convention speaker.

He was one of the few Americans invited to speak at the Keswick Convention in England.

The story is told of Dr Pierson collecting funds for a special object … and a wealthy man said to him, “If I had to preach your funeral sermon I would take as my text: “And the beggar died,” to which Dr Pierson replied, “I would not object to that … as long as you finish the verse, ‘And he was carried by the angels into Abraham’s bosom’” (Luke 16:22).

For more detailed information about Dr Pierson go to: http://www.reformedreader.org/rbb/pierson/mrphiladelphia.htm