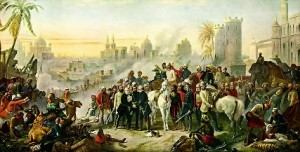 This is profoundly significant for the menfolk of the west. They are the ones who are supposed to lead, as the head of their home. Yet they cannot take that lead, since they know nothing of true headship and authority. Their challenge is to stay under command.

I want to help you learn how to do that, so here’s an analogy I recently used to illustrate this principle.

The Chain of Command

Before we dig into my illustration let me remind you how God has set up the command structure. God has created an hierarchical authority structure for us to operate within. God is the head of that structure. The next in command is Christ. So God, as Almighty God and as the Son of God, Jesus Christ, occupies the two top positions in the hierarchy. Husbands are given a place of authority directly under Christ. Wives are given a place directly under their husband.

Every time you let someone change the orders your boss gave you the effect is that of mocking your boss and demeaning the boss’s authority. What does it say about your boss, when you let some person off the street tell you what to do? You are lowering the authority of the boss to being no more significant than that of a stranger or some person with no authority.

The most important thing for a person to do is to stay under command. This is especially so if you have been given the privilege of direct access to someone of high authority. You certainly would not want to violate that authority and lose your place under it. You want to remain in direct line of command from the highest officer possible.

To do that you must honour your boss. You must be diligent to faithfully fulfil the wishes and instructions of the boss, so he is pleased with you and retains you in the position of authority he has assigned you.

This is equally as important for husbands as the head of their home. If a man disregards the lordship of God and Christ in his life he loses the effective authority that has been delegated to him. He ends up with a wife and children who have no regard for his leadership and headship, since he has no regard for Christ’s headship over him.

Many men are already starting from a lost position. They have to regain their authority in a context where their wife rules them and their children ignore them. This is a pretty hefty challenge, but it is one that can be met. God is the one who assigned men their authority and so when men move into it they do have God’s backing.

The question I get asked from time to time is about actually activating that authority, especially in a context where it has never been exercised before. That is where this Soldier analogy came from. I hope you find it helpful.

Imagine two platoons of soldiers from different armies working together in a battle zone against a common enemy. Each group is kitted out with their issue of uniform and equipment. The soldiers from the two armies mix together, but are under the direct command of their platoon leader.

A soldier from one army advises a soldier from the other nation that the way he carries his ammunition belt is not right. One army wears the belt around the waste and the other slings it over the shoulder. The solder being told what to do by the other soldier has to decide what to do.

He can take the advice of the other soldier. If he does so, he is stepping outside the instructions given him by his own army command. The kit which he is issued and trained to use is to be utilised as instructed. If he rejects his own command he makes himself subservient to a mere soldier from a different nation. He is acting outside his chain of command.

However, the suggestion may be a good one. So, could he not follow the instruction if it strikes him as a good idea? The answer is, No! He must operate within the chain of command and stay under the authority of his commanding officer.

What he can do is go to his commanding officer and ask for permission to wear his kit in a different manner to what is prescribed. The commanding officer may happily give him leave to do so. It may not be a significant matter. The officer may allow the soldier to do what he thinks best. Or there may be good reason why the prescribed wearing of the kit has to be maintained.

By respecting the command of his own platoon leaders the soldier is staying in a place of authority. That authority protects him and also empowers him with delegated authority.

The point of this illustration is to convey the concept of authority to people who have little practical experience in living under God’s authority. The next issue is how to practically apply authority and headship into a home where it has been absent. I’ll tackle that question in a future post about Regaining Domestic Authority.