I saw something sweetly tantalising in a familiar Bible text on Sunday. It has to do with Authority which is a bit of a thing with me over the past year or so, linked in to such things as Jurisdiction, personal sovereignty and such like.

What I saw is that authority is directly linked to speaking authoritatively, so that things happen as a result.

Now, guess where I found that in the Bible. It is in a passage that is often quoted in reference to authority – the comments by the Roman Centurion to explain why he was confident that Jesus could heal the centurion’s servant simply by speaking the word. 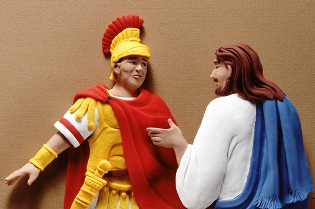 “And when Jesus entered Capernaum, a centurion came to him, begging him, And saying, Lord, my servant lies at home paralysed, grievously tormented. And Jesus said to him, I will come and heal him. The centurion answered and said, Lord, I am not worthy that you should come under my roof: but speak the word only, and my servant will be healed. For I am a man under authority, having soldiers under me: and I say to this man, Go, and he goes; and to another, Come, and he comes; and to my servant, Do this, and he does it. When Jesus heard it, he marveled, and said to those that followed, Truly I tell you, I have not found so great faith, no, not in Israel.” Matthew 8:5-10

Now, in case you missed the salient point let me remind you that this dialogue is about Authority. The centurion is absolutely confident that Jesus has the Authority to heal the sick servant. And that confidence about authority is directly linked in the Centurion’s mind to speaking.

As you explore your own authority remember that it is directly linked to your words. When dad gives an instruction to his children or says “No” to their request there is great power in that expression of his authority. When a person who has authority speaks up in a meeting, to raise a question or press a point, the words have effect.

People who don’t have authority are ignored, shouted down, disregarded and silenced. If that is you, then you need to talk with God about what you have to do to recover your personal authority, or the authority of your place (as parent, husband, leader or whatever).

Another key from that passage about the Centurion is that a person has authority not inherently of themself, but because they are “under authority”. The Centurion said “I am a man under authority, and so I am able to tell others what to do.” If you have lost your authority it may be that you need to repent of having rejected the authorities which God has placed over you (your parents, husband, boss, leaders, etc).

I encourage you to discover the authority God has given you, reclaim and heal it if it has been damaged or lost in some way, and then Speak Up! Speak as one with authority, so you can release that authority into those you are responsible for.

The image of Jesus with the Centurion, above is “A Centurion’s Plea” from Clay Illustrations by Georgia Cawley