What is Justice? When people say they want “justice”, what do they mean?

Can you give a good definition for justice?

I have been urged by friends to get right back to the basics of “justice” so people recognise what it is that I am fighting for. To do that I will probably have to write several articles that open the subject bit by bit.

Ignoring the dictionaries, we can say that “justice” is when things are done right for all.

Another way of putting it is that justice is when you do what your conscience tells you is right.

And yet another way to put it is that the higher moral values are upheld in a situation, no matter who it upsets or disadvantages.

But I think the best way to discover justice is not in definitions but in practical examples.

English ideas of “justice” came from the Holy Bible, because England has had a thousand years of Christianity. English common law was developed from putting the Bible into practice. The kings and queens made promises (Imperial Acts) based on their responsibility before God.

So, let’s have a look at a well known Biblical example of justice at work.

King Solomon was faced with a thorny question from two prostitutes. They were both single mothers and overnight one of the babies died. The woman who woke up with a dead baby accused the other woman of stealing her baby, swapping them in the night. Both women claimed the living baby was theirs. (See 1Kings 3:16-28) 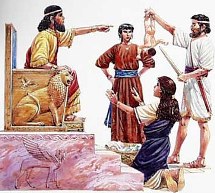 Note a couple of things about this case right up front. These women had no-one to protect them. They did not have husbands. They were immoral women and in some cultures they could have no rights whatsoever.

But here they are speaking directly to the King of the whole land. That’s justice! True justice gives the same rights to ALL, because all men are created equal.

In some cultures there is an elite group which seeks to rule others as if those others are lesser people. That is happening in Australia and other advanced nations today.

Way back in 1215 the English monarchy recognised and declared that everyone, even the King, is under the law. There is justice for all.

Both of these women made the same claim, “It’s MY baby!” So, one of them was lying. But, being women who lived by immorality, they would have no qualms about lying.

Yet they were not rejected. While the situation was challenging, King Solomon did not send them away empty. He determined to get to the bottom of the matter.

In some places it’s just “too hard” to sort things out and so the courts resort to sharing out the blame or the costs or the loss. The idea is that some kind of equity or fairness is achieved. But that is not Justice. Justice gets right to the bottom of the matter and makes sure that the decision is as accurate as can be.

Australian courts have tripped me up and denied me justice by imposing their various rules and protocol. But notice that King Solomon did not send these women away to fill out a form in triplicate, or to get representation from a duly qualified lawyer, or to present their case in a particular fashion. They had complete and ready access to the source of justice. The “Substance” of justice was not destroyed by the “form” of the “legal process” or the rules and regulations.

In Australia today I find that courts use the legal process and their rules and regulations to take justice from ordinary Aussies.

Justice is not a matter of text book exactness, but a matter of the heart. It is a ‘moral’ issue. God, who created us, is a moral Being and He looks at our hearts.

King Solomon, wisely, exposed the heart of the women.

He told the women he would cut the baby in half and give half to each one. He had no intention of doing so, but he used that suggestion to get the “hearts” of the women speaking.

The two responses revealed which of the women had a mother’s heart for the child. The woman who believed she had been cheated proved to be the one who was the mother of the child.

When the two women left Solomon one of them was exposed as a thief and a liar. I don’t think she was happy about that.

True justice is not about making everyone happy, but doing what is RIGHT. The woman who stole and lied had no right to anything except shame, and that is what she received.

The woman whose child was stolen received what was rightfully hers. He child was given back to her. She received justice and could raise her child in all the joy of her motherhood.

Justice, then, is doing what is right, morally. It is not about everyone getting an equal share, but it is about everyone having the same rights before the courts.

Everyone is entitled to an outcome that is morally right. It will be an outcome that sits right in your conscience and that pleases God, because evil people will not be rewarded.

Today in Australia and other advanced nations we are not given that form of justice. People who do not use lawyers are disadvantaged. People who challenge the elite, ruling class which thinks it is superior to others, are blocked in the courts.

The courts have become a place where people use power to take advantage of others. They entangle people with rules, fairness, pre-set judgments and other tricks to deny them justice.

What makes this so criminal, in perverting the course of justice and committing Treason against the Crown, is that the monarchs of England promised us all over 700 years ago that, “We will sell to no man, we will not deny or defer to any man justice or right.”

To catch the next articles in this series click on the following links: